Can a jellyfish unlock the secret of immortality?

By Slickrock Adventures on November 30, 2012 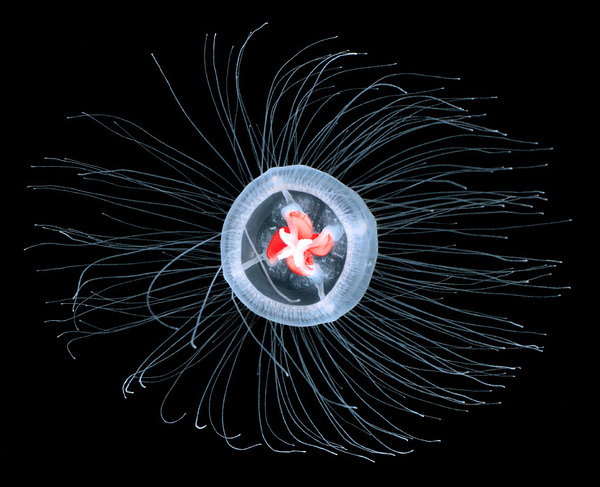 This article in the New York Times highlights recent discovers about a particularly unique jellyfish, Turritopsis dohrnii, more commonly known as the immortal jellyfish. Even though we don’t see this species down in Belize, we do see two varieties at Glover’s Reef, the Upside Down Jellyfish and the Sea Thimble Jellyfish. They are discussed in this post following the brief excerpt from the NYTimes article.

Sommer was baffled by this development but didn’t immediately grasp its significance. (It was nearly a decade before the word “immortal” was first used to describe the species.) But several biologists in Genoa, fascinated by Sommer’s finding, continued to study the species, and in 1996 they published a paper called “Reversing the Life Cycle.” The scientists described how the species — at any stage of its development — could transform itself back to a polyp, the organism’s earliest stage of life, “thus escaping death and achieving potential immortality.” This finding appeared to debunk the most fundamental law of the natural world — you are born, and then you die. (read the full article here…)

The two jellyfish we see most often on Adventure Island are the Sea Thimble and the Upside Down. Jellyfish are not always present in the waters of Glover’s Reef but they do drift through regularly and unpredictably. Therefore, we advise all our guests to wear dive skins (light weight skin protection and thin thermal insulation) whenever they enter the water. These dive skins help prolong your diving time and also protect the skin against rashes caused by proximity to a cloud of jellyfish. 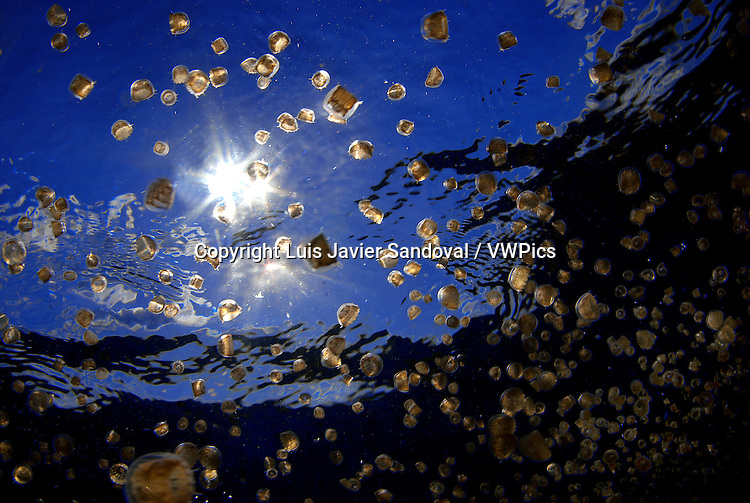 Sea Thimble Jellyfish — This marine animal is a small jellyfish resembling a thimble that measures about 1″ in diameter and is conspicuosly mottled with dark brown markings. This Jellyfish, together with corals, seaanemones, hydeoids and hydras are included in a group of animals without skeletons named cnidarians. One characteristic of this important group is that they have numerous stinging cells called nematocystswhich act as microscopic syringes to inject toxins when touched.

Along the Mexican Caribbean coast dense aggregations of the Thimble Jellyfish appear everyyear from late January to early June. The jellyfish occur in three swimmming stages as juveniles or ephrae, as adults and as larvae or planulae. They are transported by winds and currents to other areas on the time scale of a few hours to a few days.

Upside-down jellyfish is a genus of true jellyfish and the only members of the family Cassiopeidae. They are found in warmer coastal regions around the world, including shallow mangrove swamps, mudflats, and turtle grass flats in Florida. The medusa usually lives upside-down on the bottom, which has earned them the common name. Where found, there may be numerous individuals with varying shades of white, blue, green and brown.

They have a mild sting since they are primarily photosynthetic, but sensitive individuals may have a stronger reaction. The photosynthesis occurs because, like most corals, they host zooxanthellae in their tissues. The stinging cells are excreted in a mucus; swimming over these jellies (especially using swim fins) may cause transparent, essentially invisible, sheets of this mucus to be lifted up into the water column, where they are then encountered by unsuspecting swimmers. The stings, appearing in the form of a red rash-like skin irritation, are notorious for being extraordinarily itchy. Sometimes this jellyfish is picked up by the crab Dorippe frascone(family Dorippidae) and carried on its back. The crab uses the jellyfish to defend itself against possible predators.