Riding the Wave of Surfer Fitness

By GRETCHEN REYNOLDS of the New York Times 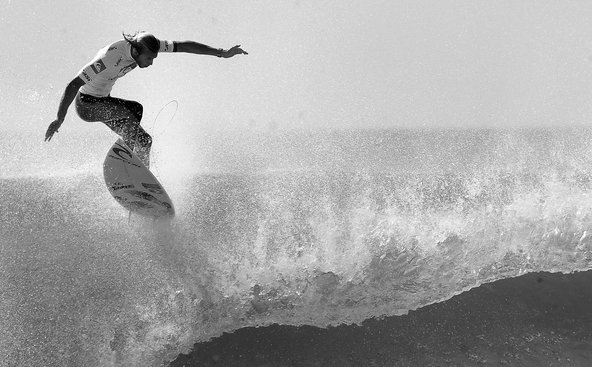 To the casual spectator, surfing seems to involve primarily balance, grace, nervy insouciance and a certain laid-back, ineffable oneness with the powers of the deep. But a series of newly published studies of the actual physical demands of surfing reveal that other, sometimes surprising aspects of fitness may be as important to surfing success as the ability to judge and remain upright on a swell.

For the first of the new studies, which was published last month in The Journal of Strength and Conditioning Research, scientists at Auckland University of Technology in New Zealand recruited 12 professional New Zealand surfers and asked to follow them throughout several competitions.

Studying surfing is a tricky business, since it requires tracking people who are in rapid motion far out on a billowy sea. There is no reliable lab-based treadmill equivalent to riding a wave, which is one of the reasons little surfing science has been completed to date.

But the Auckland researchers overcame that obstacle by fitting the surfers with tiny, sophisticated and, of course, waterproof heart rate monitors and GPS units and then simply letting them ride. The surfers wore the various monitors during three heats at two separate competitions in the surf off the New Zealand coast.

The scientists were hoping to determine just how much time the surfers spent in each of the various elements that make up surfing, including paddling to waves, bobbing about in the water waiting for a wave, riding that wave and then recovering from the ride. They also wondered how strenuous each of those activities was — a state that would be indicated by the surfers’ heart rates.

What they learned was eye-opening, says Oliver Farley, a doctoral student at Auckland University of Technology and himself an avid surfer, who led the study.

Surfers, for instance, spend very little time actually surfing, if surfing is defined as riding a wave. Only about 8 percent of the time that the surfers spent in the water consisted of time atop a wave. Rides were short but fast, with average speeds of more than 25 miles per hour and top speeds approaching 30 m.p.h.

Riders spent far more time paddling to the waves, with that activity accounting for about 54 percent of their total time in the ocean. The rest of each session was spent maintaining position while waiting for a wave or in brief, intense bursts of paddling to catch a wave.

Perhaps most surprising for people who think surfing looks calm and meditative, surfers’ heart rates soared to a chest-burning 190-plus beats per minute during the competitions and rarely dropped below 120 beats per minute. The surfers also covered considerable territory while paddling, averaging more than half a mile during each heat, or about a mile and a half per competition.

In other words, surfing is a considerable workout requiring high-level aerobic endurance, Mr. Farley says, given that the heart rate stays above 120 beats per minute at least 80 percent of the time, and given the amount of time spent paddling.

But surfing also requires muscular power, particularly in the upper body, he continues. In the second of the new surfing studies, also conducted by Mr. Farley and his colleagues and published this month in The Journal of Strength and Conditioning Research, elite surfers visited the group’s lab and lay on a bench equipped with a kind of a flywheel and paddles. The surfers turned the paddles rapidly with their arms to simulate ocean paddling.

All of the volunteers were strong. But, as it turned out, those who could generate the most wattage while paddling were also the highest-ranked surfers in the bunch.

Presumably, Mr. Farley says, their muscular power allowed them to paddle back to the waves more quickly after each ride and ultimately catch more waves, translating into competitive success.

What these findings mean for recreational — or wannabe — surfers is clear, if daunting: Before investing in a board or a beach vacation, visit the gym and the running track, Mr. Farley says. Do “press-ups, bench presses, squats, abdominal crunches, pull-ups,” and general arm exercises, he says. Consult an athletic trainer at your gym if those terms are unfamiliar.

“Then,” Mr. Farley says, “move into power training,” like jumping onto and off boxes or stair steps, followed by “surf-specific training, such as paddling with resistance,” preferably in a pool but alternatively on a rowing machine in a gym. Meanwhile, put in hours of running, bicycling or swimming to build the endurance required to reach the good waves.

All of which can make surfing sound rather grueling, even dull. It is, after all, a sport that when broken into its component parts involves only, as Mr. Farley writes in his July study, “intermittent high-intensity bouts of all-out paddling intercalated with relatively short recovery periods” and “breath holding.”

But anyone looking to understand the addictive, heady allure of surfing can find scientific evidence of its appeal hidden in Mr. Farley’s work. When the researchers parsed the surfers’ heart rates during the competitions, they found that pulses did not peak during paddling, no matter how hard the riders were scrabbling to grab a wave. Instead, their hearts beat most rapidly just as they finished riding each wave.